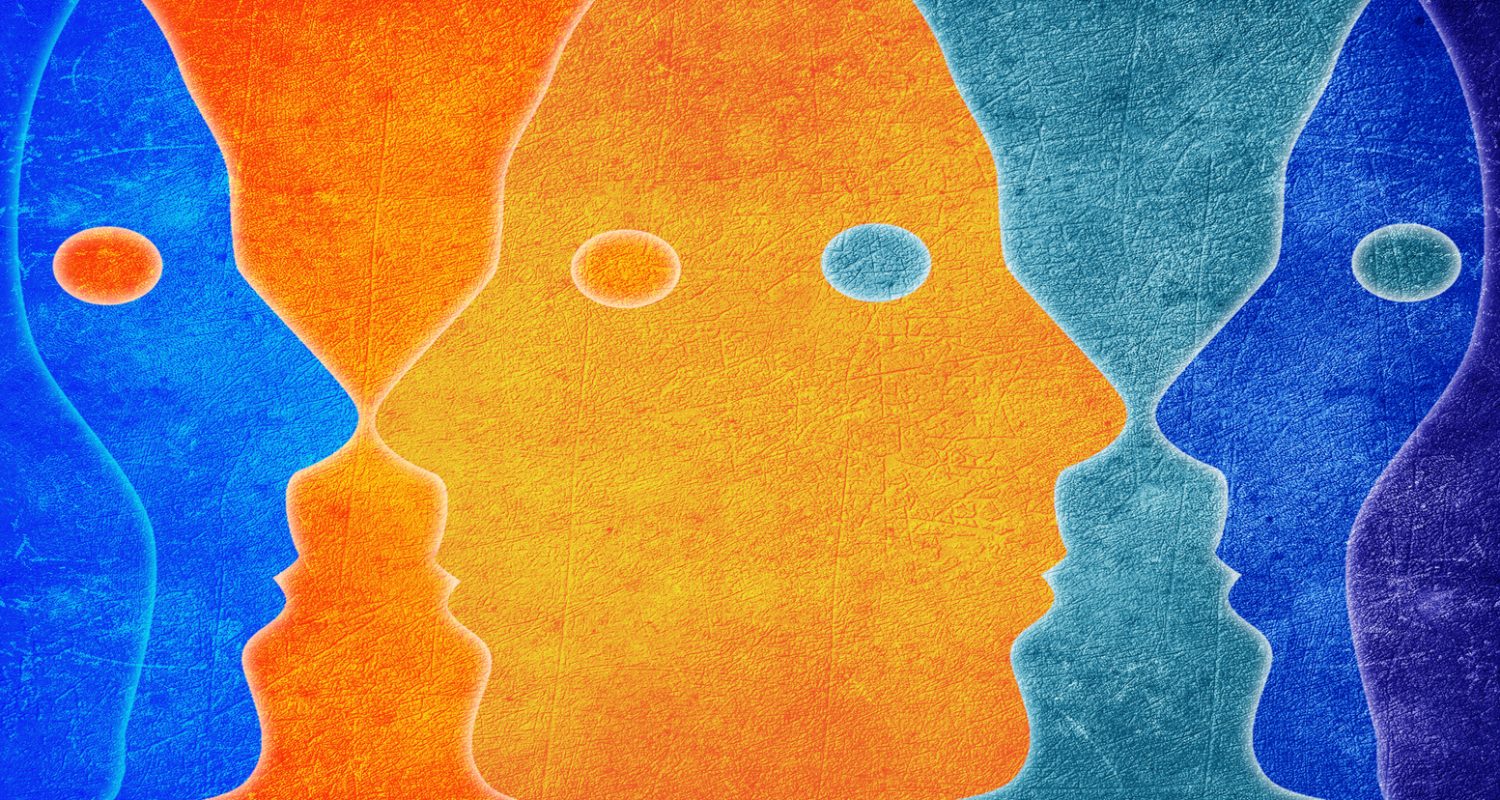 Want to know what happens in the mind of a customer on the busiest shopping day of the year? Jack Stanton examines the thought processes that take place in our brains.

I wanted to call this article ‘Why do we buy the things we buy and how do we buy the things we buy when we buy them?’, but I didn’t want to put any additional strain on your brain. I need it to be fresh and receptive, because I’m about to go all Sigmund Freud on your caboose. In this article, we’ll be looking at the psychology of shoppers on Black Friday – Britain’s busiest shopping day.

When we buy online, it’s rarely an accident. A Freudian slip is an unintentional error in speech regarded as revealing subconscious feelings – perhaps a repressed or unconscious wish – but a slip of the mouse and an unintentional left click is rare. Oh sure, sometimes we deeply regret making the purchase after it has arrived; but (a drink or three notwithstanding) we know what we’re doing when we hit ‘Buy Now’. The question is, do we really know why?

Did we know what we wanted before we visited a website, or were we somehow steered towards the thing we purchased? If you’re a retail business, you’ll no doubt already have an understanding of how important a customer’s user experience on your website is to closing sales. But have you ever considered what goes on in the head of your customers, and how you can manipulate the psychology behind a day like Black Friday to your benefit?

Let’s crack those shoppers’ heads open and take a look inside.

What’s in the head of a Black Friday shopper? 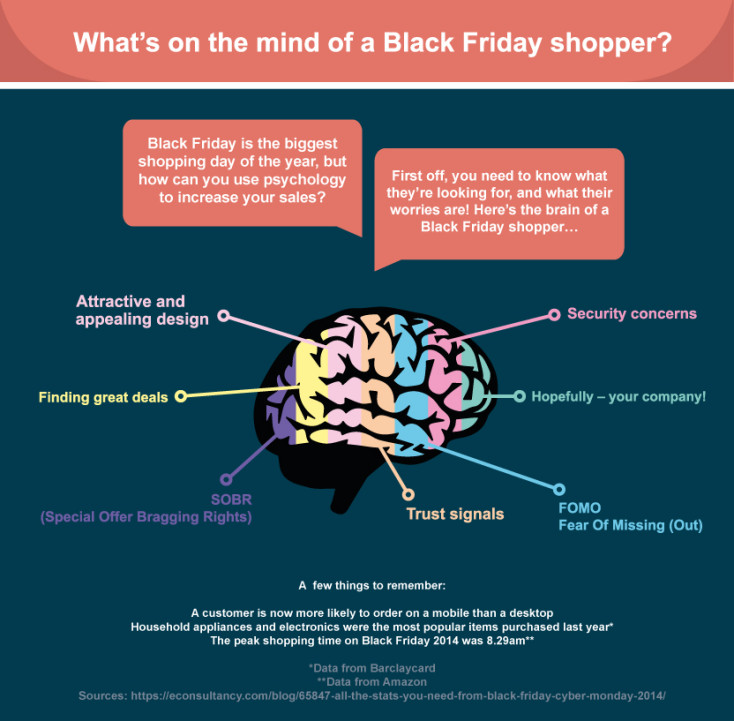 FOMO (Fear of missing out)

It’s a phenomenon that’s always been around, but in the old days ignorance was bliss. Now that we’re exposed to everything all the time, through social media and 24-hour news coverage, there’s a lot more that we see others doing and enjoying that we’re not. Hence FOMO – the fear of missing out.

It starts with hype. Creating a buzz and digital word-of-mouth requires starting your Black Friday promotions early – this way you can prevent your competitors bagging those all-important sales. We all want to feel included, and the fear of everyone else being in on something that you’re not is a big part of discount days like Black Friday.

“We hate losing more than we love winning,” says Rob Ellis, Director at consumer insight firm Cog Research. “Black Friday confronts us with loss aversion (or FOMO, in other words).”

“If I’m looking for a Blu-ray player and I see a company advertising a huge sale on them coming up on Black Friday, I’ll be tempted to wait in order to get it cheaper,” says PPC specialist Coralie Wood. Paid search spend increased 88 per cent year-on-year between 2013 and 2014, according to Econsultancy, and it’s likely to go up again. Make sure your company is amongst the action.

Aside from targeted paid advertising on social media sites and search engines, targeted email marketing is also going to have a psychological impact on shoppers, as designer Jon line suggests: “Get your email marketing over early to build up the suspense. Make me feel like I’m going to miss out on something great.”

Content specialist Dai Howells adds: “A lot of deals are going to be of no interest to me, but a few are really worthwhile – limited time only offers or heavy discounts on targeted products etc. So, putting real figures on your advertising is a great carrot to dangle.”

Your company – thanks to consistent reminders

There aren’t many companies bigger than Amazon; it was the online marketplace which saw the biggest Black Friday 2014 spending increase (up a staggering 76.91 per cent, compared with the 2.97 per cent of Google Shopping and 9.82 per cent of eBay). There are many things that Amazon does really well, one of which is to always position itself in front of potential customers.

“I do all my Christmas shopping on Amazon,” says SEO specialist Dave Colgate. “Last year Amazon advertised through its shopping app, on the website, and through online advertising – which is where I caught wind of its deals. I was consistently reminded about Amazon’s offers in the lead up to Black Friday; I think I was probably well aware a good month before it happened.”

Of course, some people try very hard not to get caught up in the hubbub of Black Friday commotion. So what should retailers do differently to get customers sucked in?

“I think it depends on the retailer,” says Emily Smith, another of our SEO specialists. “Sometimes deals aren’t as good as they originally seem and people seem to get too caught up in the hype to realise that. I think retailers should give reassurance to customers by explaining that they have extra processes in place to ensure products get delivered on time or that they won’t over-sell items.”

With so many people buying things at the same time, it’s hard for your customers to feel special on Black Friday. However, one of the biggest things on the mind of shoppers that day isn’t being made to feel warm inside. Instead, it’s security concerns over product quality and personal data security, what with so many orders coming in at once.

For some, if your website doesn’t seem trustworthy, it doesn’t matter how good your deal is.

“Unless I trust the website and believe in the brand (through first impressions), and there are trust signals such as good volumes of product reviews, social media activity and secure connections, then even if they were offering a 95% discount – I still wouldn’t share my payment details,” says Dave.

It’s a mentality that Jon shares. “Trust signals are a huge factor for me. Seeing a little lock and the word ‘secure’ at a checkout can really aid in a buying decision,” he says.

The quest for a great deal

Meanwhile, for others, a great deal far outweighs these security concerns. Coralie believes that when customers are faced with what they perceive to be a really good deal, product quality is often not even considered. Emily agrees, saying: “People definitely get caught up in the moment and want to buy the product as soon as they can before it sells out. This sometimes means they don’t read the product details enough and don’t check the security of the site.”

In contrast with FOMO, you could say there’s also a sense of SOBR – a brand new concept I’ve just invented which means acquiring ‘Special Offer Bragging Rights’. It’s when Black Friday shoppers want to explore the internet on a quest to find the best deal – and be the only person they know who gets it.

The colours and the shapes

As humans, we’re influenced by the way things look. Even if we don’t realise it’s happening, the colour and design of a website can play a big part in our buying decisions. This is obviously crucial on Black Friday, when all websites are in intense competition.

“If I see a poorly-designed site then I don’t feel confident buying from it,” says Jon. “However, if I see a well-designed and thought-out site, then my confidence in them grows and I’m more likely to start shopping with them.

“In terms of colour design, Christmas is coming up; so using colours that represent it can get people thinking about presents for others.”

Dave agrees that colour is of massive importance psychologically. “It plays into natural human psychology using affordance clues,” he says “There is such thing as a seasonal colour palettes and by using colours associated with a season or occasion you can associate those products with that in the mind of the prospective buyer. So it could be argued that it can potentially increase sales.”

If you already have a well-designed website, your design needn’t change too much. A few additional touches could bolster your success, as Coralie explains: “Stickers and stars on site with ‘50% off inside’ are commonly used and placing these in prominent positions can help engage users with the page.

“Having said that, it’s important to remain on brand to ensure your brand presence remains strong with new and previous consumers.”

Lots of the points in this article are relevant all year round, not just for Black Friday. If you need help getting your website into tip-top shape to maximise sales, drop us a line at hello@vertical-leap.uk or call our experts on 023 9283 0281.

Want to be more ‘Rudolph’ than ‘other reindeer’ this year? Then send a custom-designed Christmas card or Christmas campaign to your customers to stand out.

In this post we delve a bit deeper into social media advertising to show you how it can boost your Black Friday pre-promotions.

It’s that time of year again where we turn our attention to the Christmas season. This, of course, is a particularly important time of year for eCommerce sites, with attentions especially turned to Black Friday and Cyber Monday.